By Simonetta Sommaruga and Peter Maurer, President of the ICRC

Their bright colours attract children, arousing their curiosity. And it is children who often trigger their explosion, losing an arm, a leg or their lives.

Cluster munitions are one of the world’s most treacherous weapons.

Dropped from the air or launched from the ground, cluster munitions are intended to strike targets with small explosive submunitions over an area the size of several football fields. However, these bomblets often fail to detonate as intended, lying on the ground for years, even decades, after the war has ended, waiting to kill or maim any man, woman or child who touches or steps on them.

This deadly legacy of war is not inevitable. Protecting civilians and ensuring respect for international humanitarian law is an integral part of Switzerland’s foreign policy, as well as the core mission of the International Committee of the Red Cross (ICRC). Both work to prevent and mitigate the effects of cluster munitions and to improve victims’ rehabilitation and quality of life.

The good news is that there is a treaty banning these indiscriminate and unacceptable weapons. This week marks the 10th anniversary of the Convention on Cluster Munitions, which came into force on 1 August 2010.

So far 108 countries have joined this important humanitarian treaty, which comprehensively bans the use, production, transfer, and stockpiling of these weapons. Countries that have joined the Convention have committed to destroying their stockpiles, clearing contaminated areas, and supporting the victims of cluster munitions. Together they have eliminated nearly 1.5 million stockpiled cluster munitions, ensuring that they will never be used. Large areas of land have been cleared in some countries, meaning children can walk safely to school, and adults can travel to work without fearing the worst. The Convention on Cluster Munitions has led to a substantial reduction in the use of these weapons, even by States that have not yet joined it, saving countless lives.

Despite these successes, scores of people continue to be killed and injured every year. In recent years, the use of cluster munitions has been reported in countries such as Syria, Yemen and Libya, but other countries have also been affected, and it is the civilian population that continues to bear the brunt. Moreover, many areas remain contaminated by these munitions, long after they were dropped. Clearing them is a slow and dangerous task because of the number of unexploded bomblets and their instability - the slightest movement can trigger an explosion. Let us be unequivocal: any use, anywhere, by anyone, must be condemned.

Switzerland will host and preside over the Convention on Cluster Munitions second review conference, set to meet in Lausanne from 23-27 November. Such conferences are held every five years and play a vital role in defining the progress made under a convention. Together with partners such as the ICRC, Switzerland will work to advance the Convention’s goal of a world free of cluster munitions, notably by urging States that have not yet joined it to do so at the earliest opportunity.

These commitments are critical if we are to achieve a world free of cluster munitions. We must ensure the complete destruction of stockpiles and clear all contaminated areas. And we must pledge our assistance for all victims.

The Convention on Cluster Munitions has helped considerably to protect civilians from the effects of war. Collective action is powerful: States, international organisations and civil society working together can achieve real and valuable change. The lives of countless civilians depend on it. 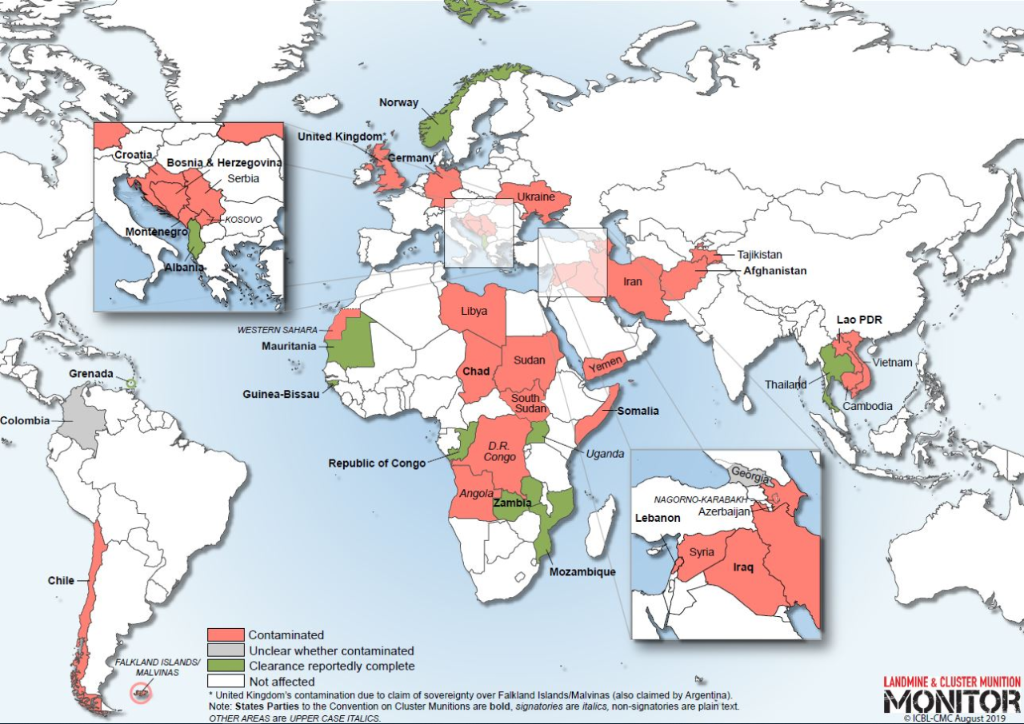 Map: States Parties to the convention

In collaboration with the Geneva International Center for Humanitarian Demining, Switzerland has organized a photo exhibition which will be shown in the following cities to raise public awareness of the Convention’s objectives and to show the humanitarian impact of these weapons: