During her working visit to India, Federal Councillor Simonetta Sommaruga met with the Minister of Power and New and Renewable Energy, the Minister of Civil Aviation and the Minister of Railways on 21 October. The Indian government would like to strengthen the country’s railways and is interested in closer cooperation with Switzerland. The head of DETEC launched work on establishing closer cooperation and opened the Swiss Railtech Networking Forum organised by the Swiss Embassy. The working visit also included tours of energy and environmental projects. Ms Sommaruga was accompanied by a delegation of representatives from Swiss companies.

Video: Impressions and statement of the working visit to India

Federal Councillor Sommaruga said in her speech: «At a time when nationalism and protectionism are gaining ground in many places we, by contrast, want to catch the opportunities offered by openness and cooperation.» 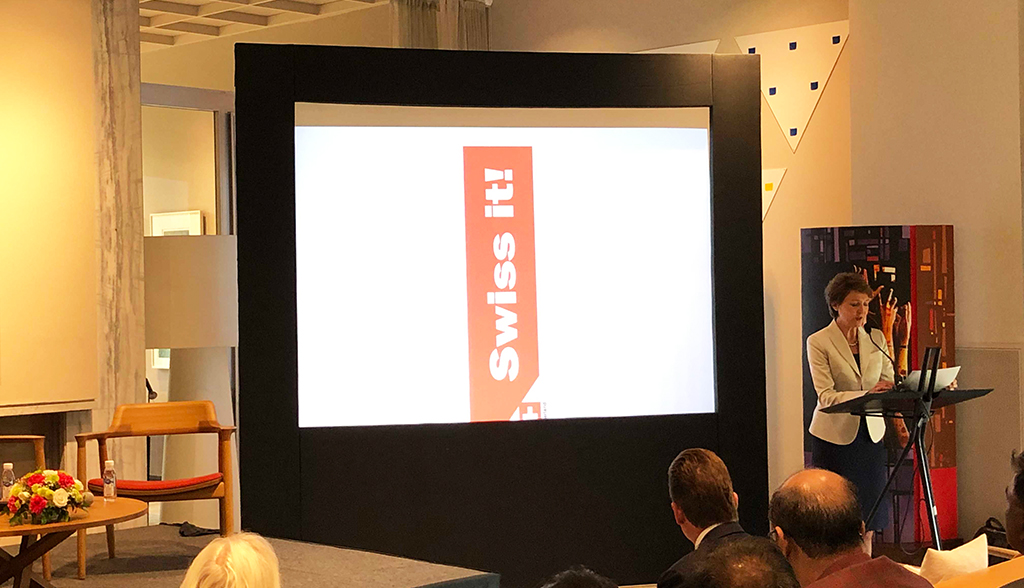 Official talks were on the agenda in Delhi. Ms Sommaruga spoke with Raj Kumar Singh, Minister of Power and New and Renewable Energy about restructuring the energy system. Switzerland has taken steps to improve its energy efficiency and strengthen renewable energies, thus reducing dependence on fossil fuels and helping to underpin its climate policy. India is also investing in the expansion of renewable energy and has launched one of the world’s largest solar power programmes.

Ms Sommaruga went on to meet with Piyush Goyal, Minister of Railways. The Indian government aims to strengthen the railways and is interested in obtaining innovative technologies, high-quality rolling stock and expertise, in order to electrify railway lines, modernise train stations and optimise operations and timetables. Switzerland has a lot to offer. Closer cooperation is therefore worthwhile for both sides: This benefits the Swiss export industry and safeguards jobs in Switzerland.

In the talks with Hardeep Singh Puri, Minister of Civil Aviation, the head of DETEC discussed developments with regard to drones and Switzerland’s experience with risk-based regulation. 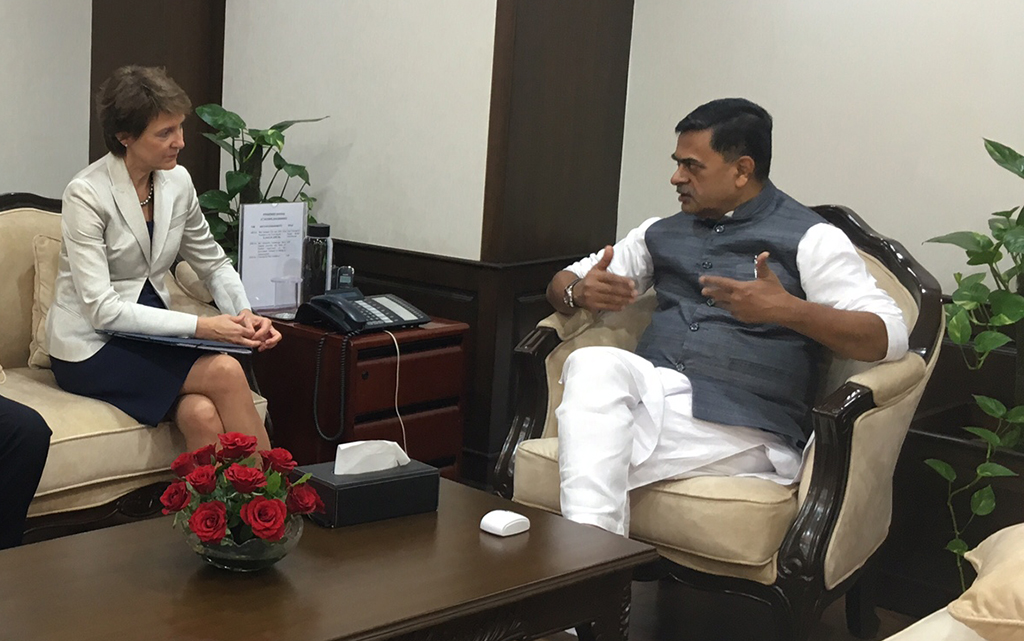 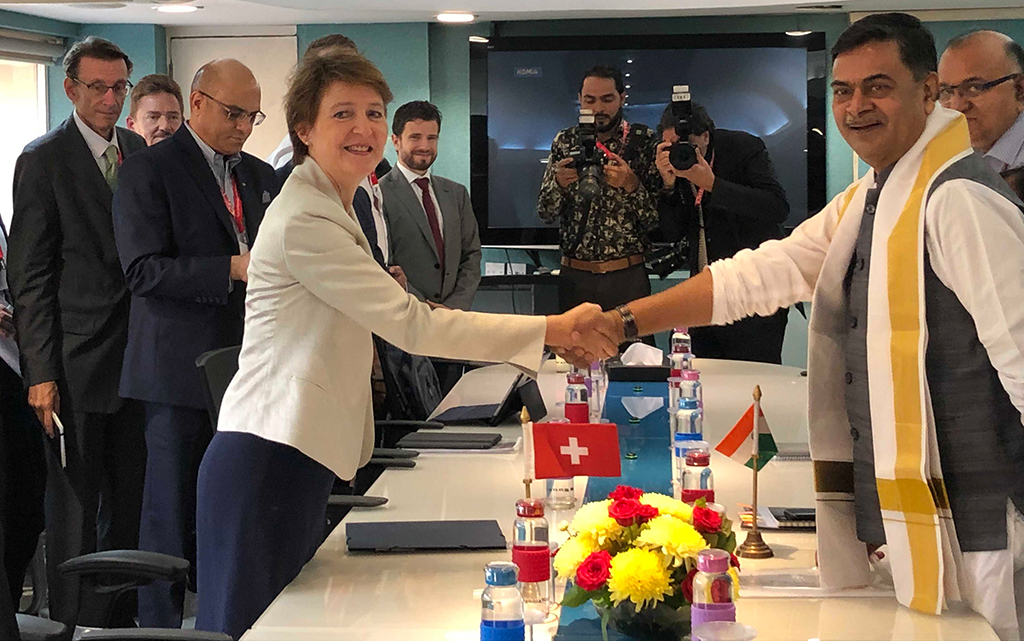 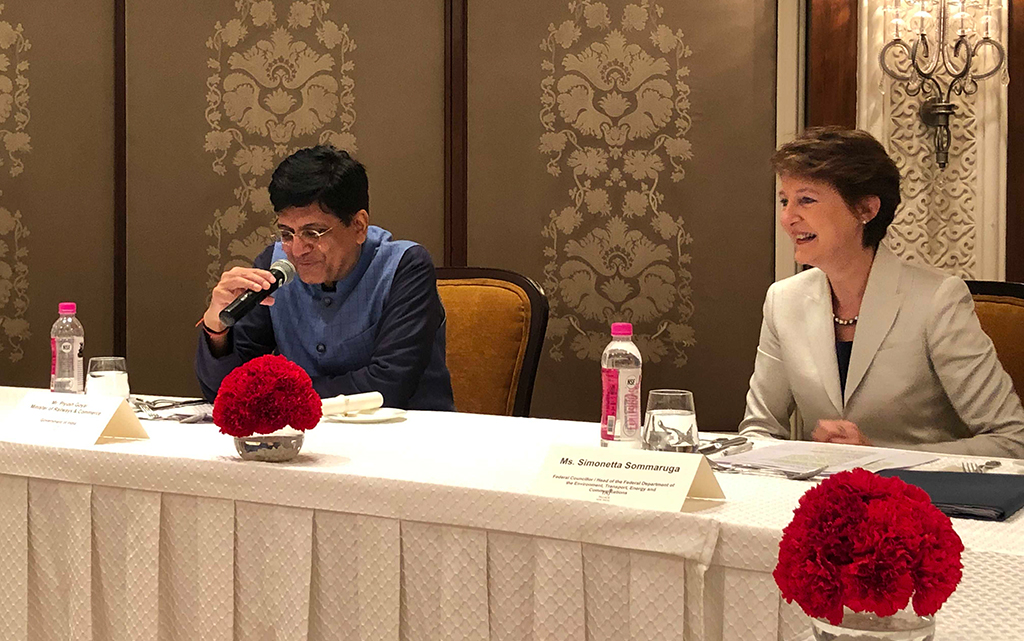 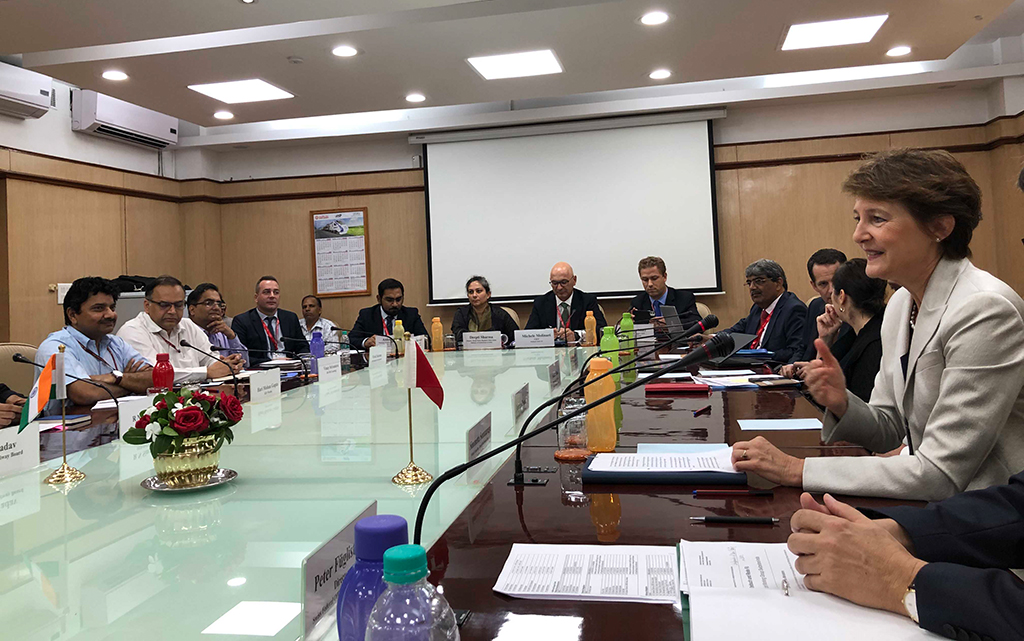 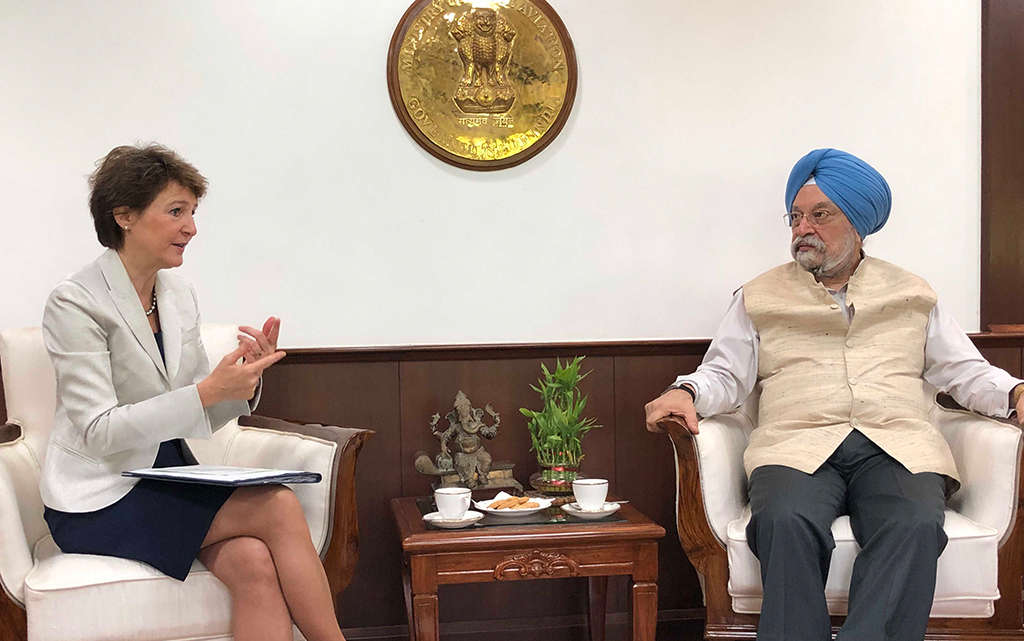 Coimbatore: CapaCITIES programme and visit of a rice farm

In Coimbatore, Ms Sommaruga visited a biogas plant and a water management project. Switzerland supports the city in waste and water management. Both projects were set up as part of the CapaCITIES programme run by the Swiss Agency for Development and Cooperation (SDC).

Youtube video of the Embassy of Switzerland in India: Capacity Building for Low Carbon and Climate Resilient City Development in India (CapaCITIES)

The Times of India, 20.10.2019: «Biomethanation plant to power street lights on Saibaba Colony» 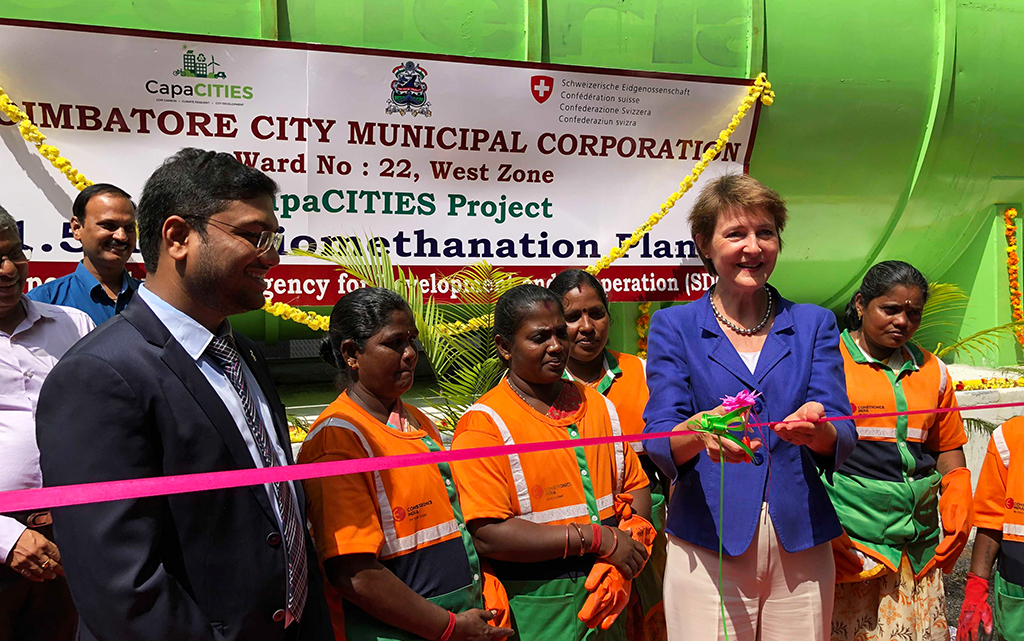 Biogas plant in Coimbatore (CapaCITIES) supported by Switzerland: Official handover to the city 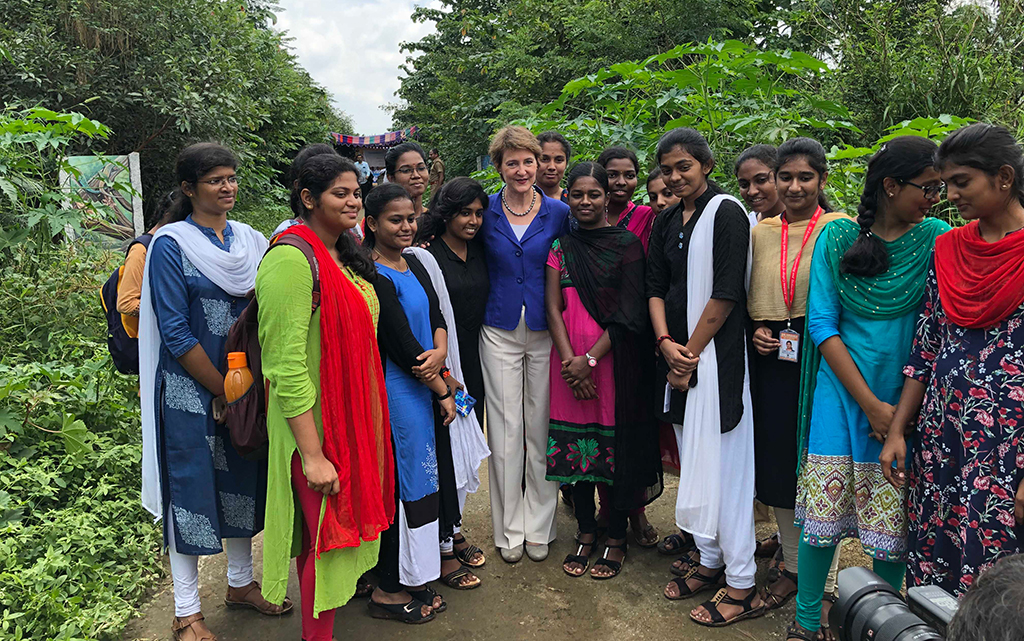 Planting a tree at Singanallur Lake

Singanallur Lake in Coimbatore: Water management project as part of the CapaCITIES programme 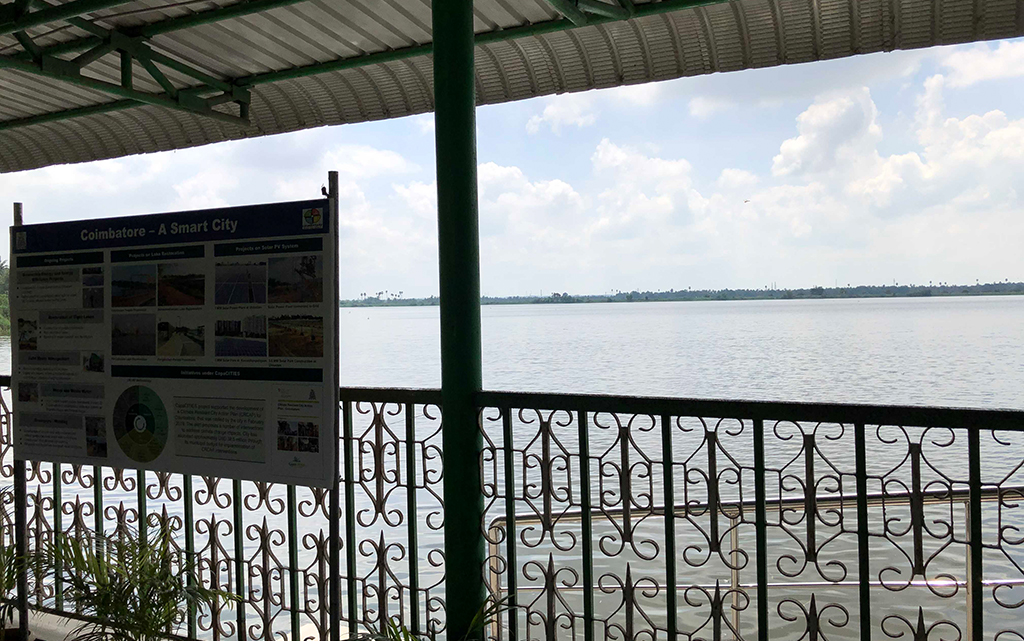 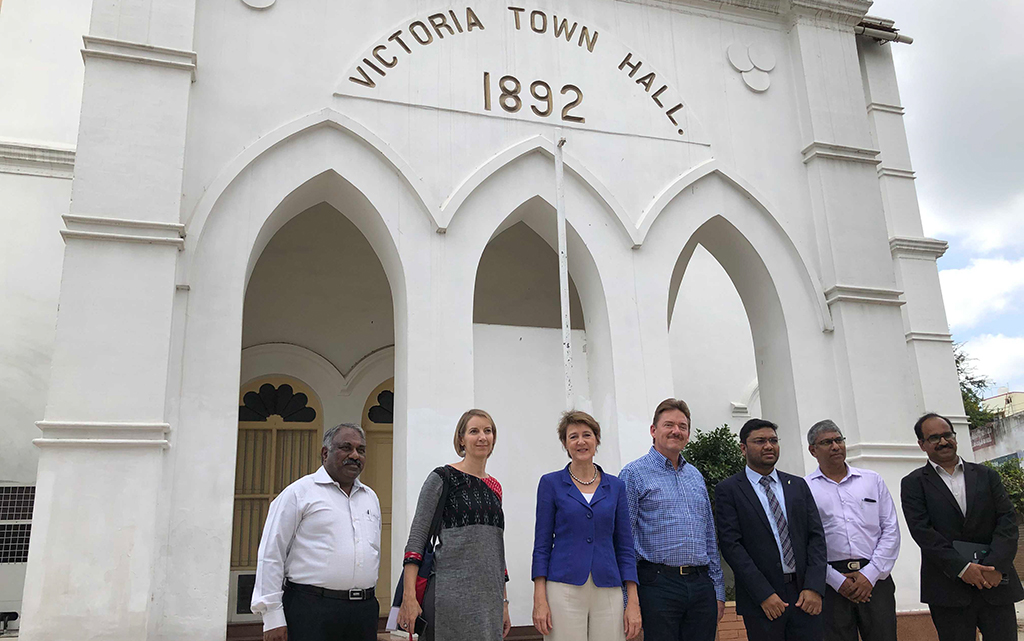 Afterwards, Ms Sommaruga also visited a rice farm at the University of Tamil Nadu. Thanks to geobased data, rice farmers can react quickly to extreme climate-related events such as drought and rain, and insurance companies receive the necessary information to cover damage. 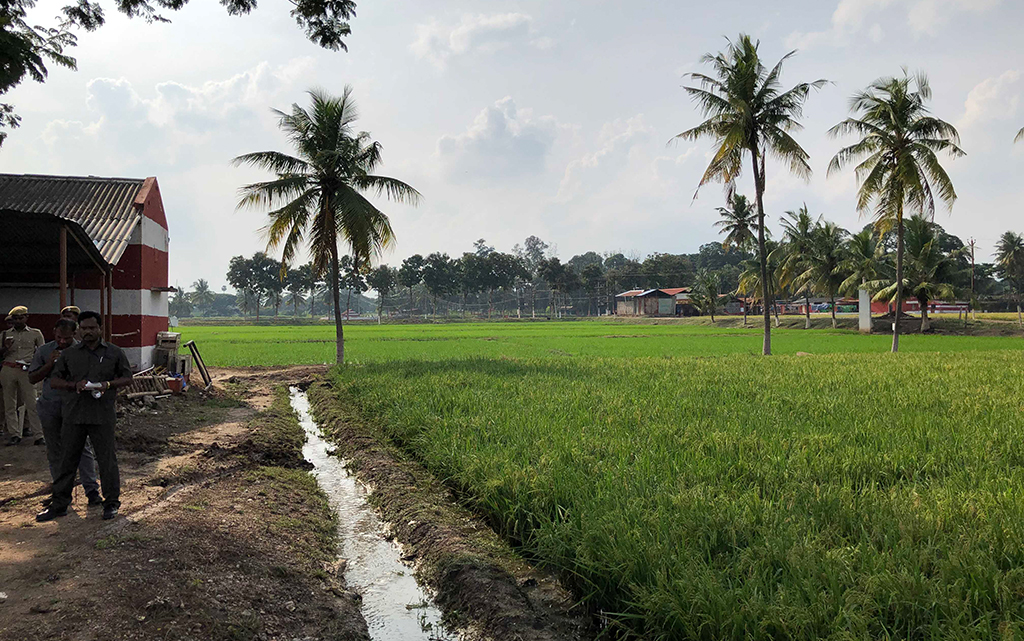 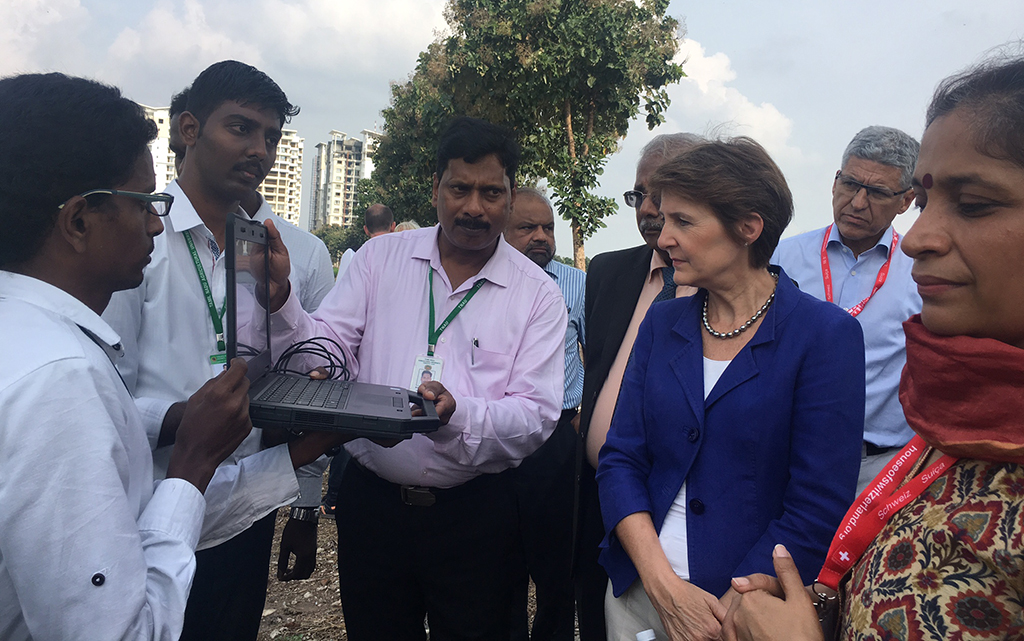 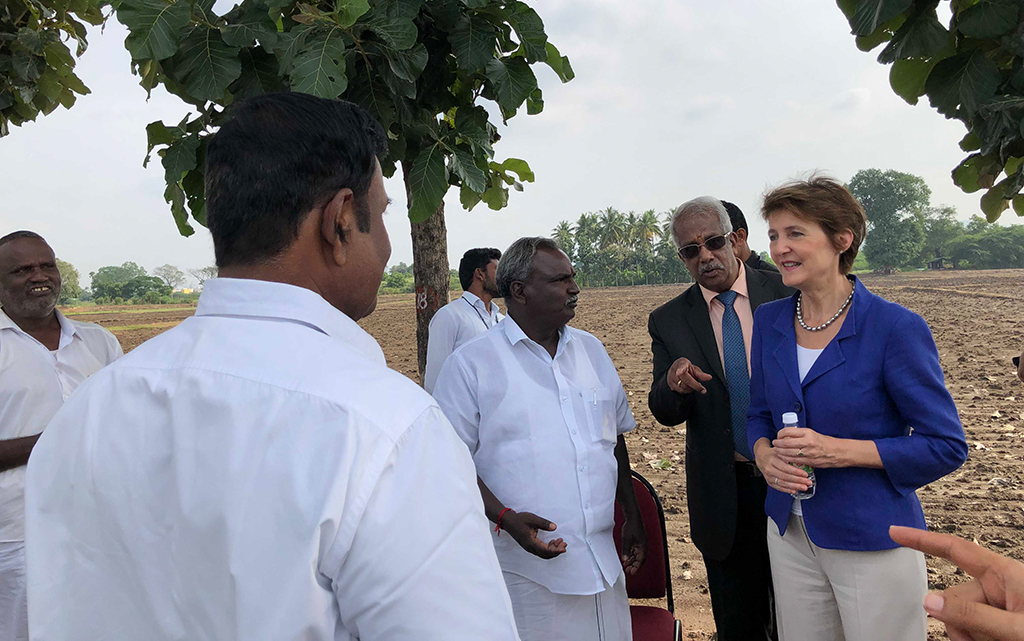 Federal Councillor Sommaruga and rice farmers of the RIICE project Bangalore: Tour of an innovation centre and debate on green finance

In Bangalore, Federal Councillor Sommaruga visited an ABB innovation centre and the solar installations that supply the airport with electricity. She also participated in a debate co-organised by Swiss Re on green finance, which focused on ways of promoting climate-friendly investment and reducing environmental risks. During the debate on green finance Ms Sommaruga emphasised that «To keep global warming below 1.5 degrees requires decarbonisation of sectors like energy production, housing and transport. Financial markets can play an essential role in this transition.» 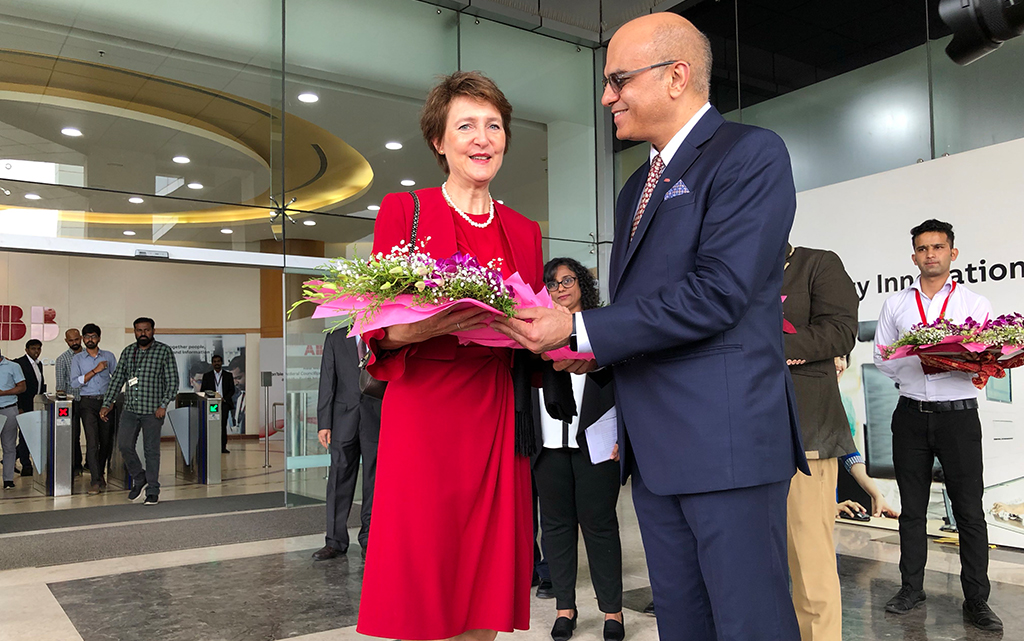 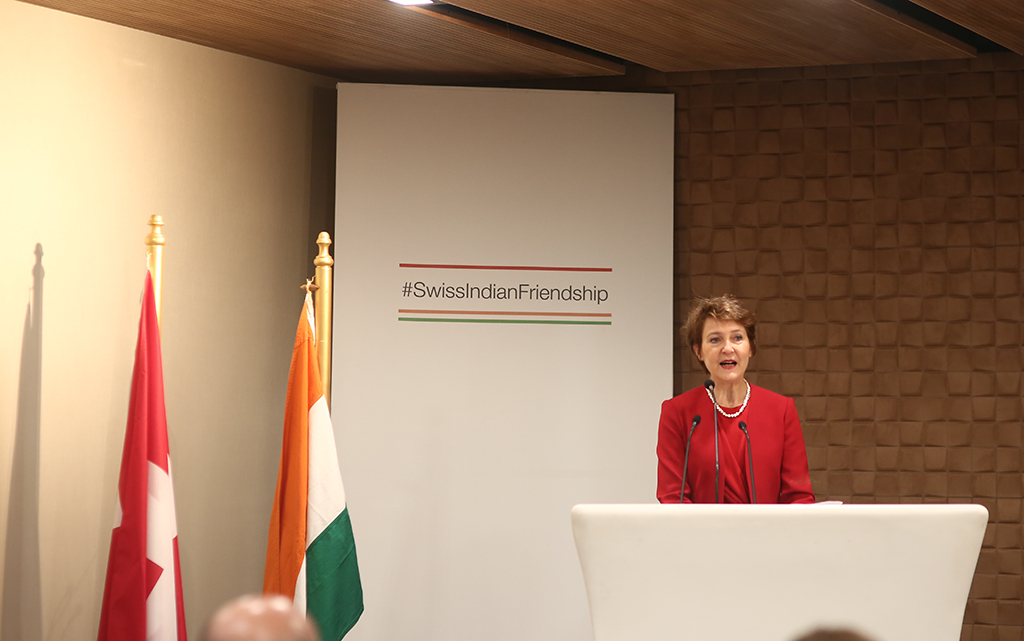 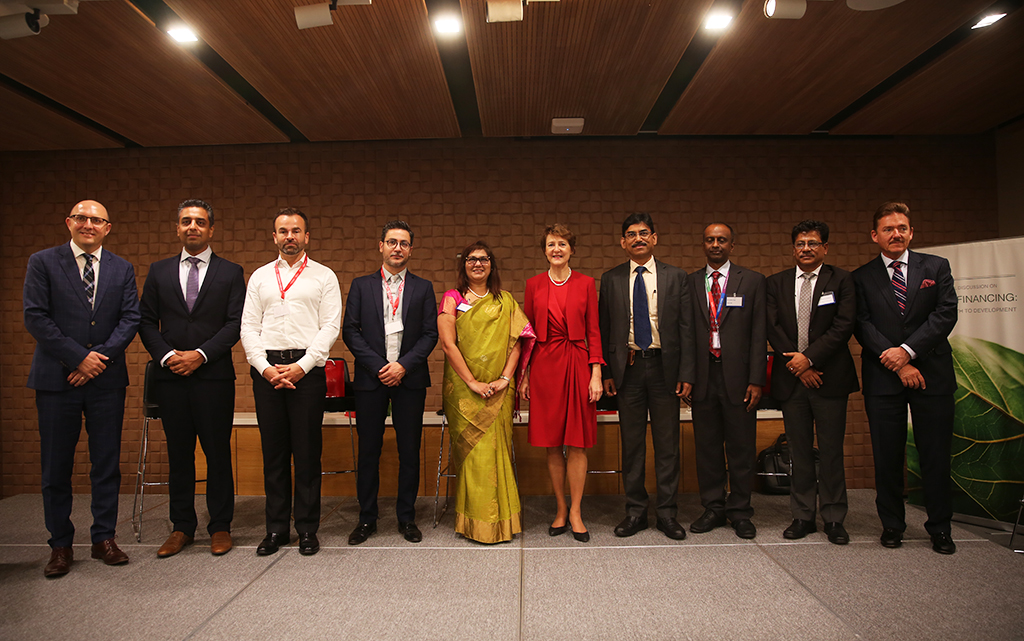 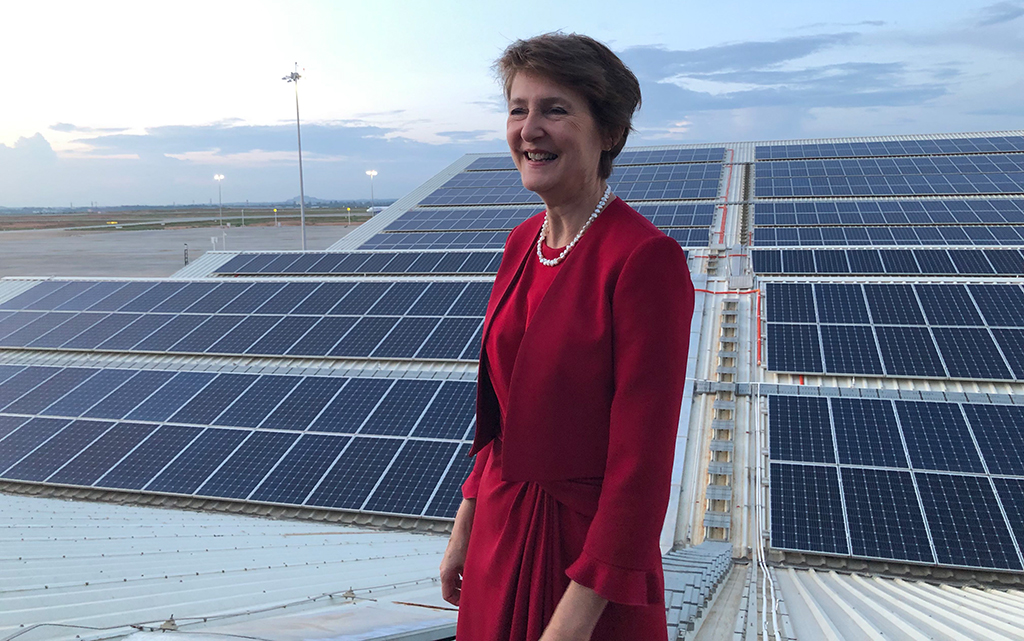 The airport of Bangalore

Articles in the media

The Times of India, 20.10.2019: «Biomethanation plant to power street lights on Saibaba Colony»

Youtube video of the Embassy of Switzerland in India: Capacity Building for Low Carbon and Climate Resilient City Development in India (CapaCITIES)